The aim of this application is to provide a toolkit for labs measurements and system control uses. The functionalities are organized in “instruments”.

A rigorous description of the App design and applications can be find in this article on scientific journal: Compact embedded device for lock-in measurements and experiment active control.

News: There is a new section on this web page about “derivated works”, including applications for Red Pitaya that are similar in design to Lock-in+PID or that are useful complements:

If you want to know more about how to use this app you should read the TheApp > Instruments menu.

For the last release, check TheApp/install/. The application comes in three flavors: Default, DEBUG and RELOAD. You’ll be looking probably for the Default option.

The source code is available at GitHub

The project code is available on GitHub: github.com/marceluda/rp_lock-in_pid/ 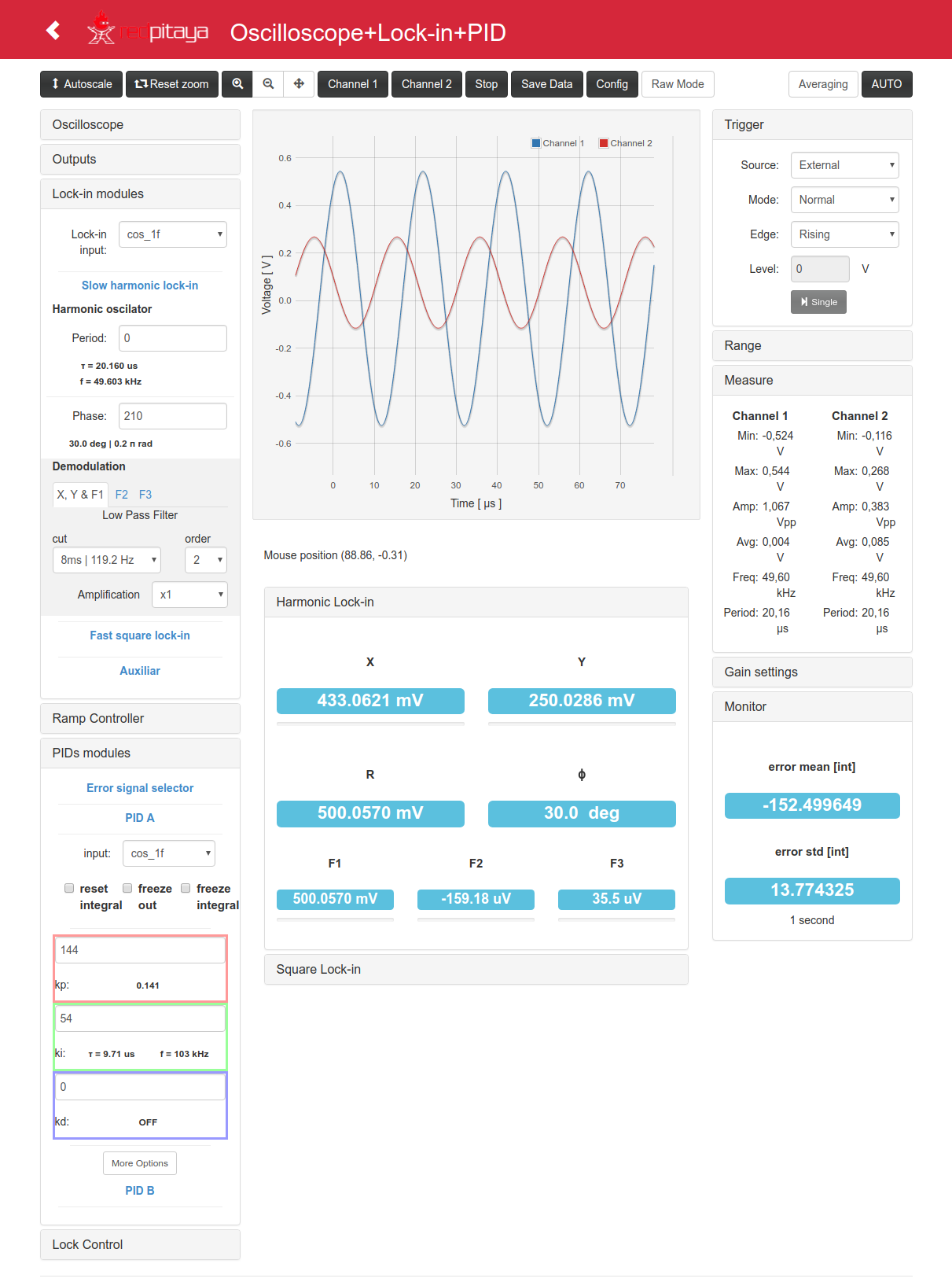 The application implements a lock-in amplifier and two PID filters. These elements are suitable for several stabilization schemes implementations: they measure low amplitude signals to get a physical system state and then use a closed-loop feedback system to stabilize the state of the physical system to a desired one.

The closed-loop system is an stabilization-scheme, usually descrived in control theory. The actually probed schemes are mostly from laser-optics applications, because Lock-in+PID was created in an optics lab with this purpose. But all off then are ready to use in any physical system o engineering project controlled by electric signals.

Implementation of the lock-in technique to measure the response of a system under and oscillatory excitation. If you use an excitation signal of frequency f (reference signal), the system response will have also a f Fourier component. With the lock-in technique you can filter the f component and measure its amplitude and phase relation with the reference signal. The filtering process enables you to reduce the noise signal from the other frequencies components and amplify the response one, enhancing the signal-to-noise ratio. We call this process demodulation. Also, you can demodulate the input signal using 2f and 3f frequencies to get harmonic components that have information of non-linear behavior of the physical system.

You have a physical variable that you want to stabilize against environment changes. You can measure it and convert it in an electrical signal you take from RP input 1. With Lock-in+PID you can stabilize it to a desired offset voltage value using an error signal ( error = input1 - offset ) that feeds a PID filter. The PID output is a correction signals that can be added to the control signal that actually controls the physical system.

This is called a close loop scheme. If it is well designed, you can use it to make the physical system to be “tied” to a particular state.

Some times you can only measure the physical system that you want to stabilize using information get by the lock-in technique. You can combine both techniques to stabilize, for example, the phase of a system, the derivative of the response signal or the noise-filtered amplitude of the response signal, building a lock-in scheme whose output will be used as the error signal for PID input.

Same versions of the same App witho minor changes where made for specific features and applications. The known works are listed in: TheApp > Derivated works menu.